hard vs soft declines for a subscription

A hard decline for a subscription company means that customer is gone unless you can get them to pay another way or update their credit card. There is no automatic updater or other magic that will make that credit card work again. It's gone.

A soft decline is however just a momentarily interruption.  Insufficient funds is the most likely cause. Try again and it might work after they have paid their bill. Or the fraud alert is resolved.

These should be treated differently in the dunning process.

What about credit vs bank vs gift cards: do these differences hold?

Who believes that a subscription service will increase their sales by adding Paypal and digital wallet solution? They certainly add complexity which might make sales worse and certainly make development more expensive.

Samsung Launches a Wallet, Again - Getting in on the action

Todays news is that Samsung is trying again int he digital wallet space. Here's some context,  We all know that there are some very large very profitable high tech firms. For instance: Apple, Google, Ebay, and Amazon.  Why do I pick those three? What do they have in common?

Probably lots of things but one is that they are starting to control their own payment systems which allows them to take a little slice of a huge effing pie. Basically, a tiny slice of the money you spend.

Apple is the most successful in this realm so far with Apple Pay.  It's well established and known as a way to pay.

Google Wallet is right there next to them and most supermarkets, convenience stores, gas stations, and restaurants are moving towards accepting them too.

Amazon has already made some inroads with their payment system for purchases beyond Amazon.

And Paypal from Ebay is of the granddaddy of all of the digital payment solutions.

Of course, astute readers will notice that I put MAYBE in my opening line. Will all these payment systems continue to flourish in the future or will there be winners and losers?  Will Europe or the US declare the combination of combined interests (hardware, OS, app store, and payment systems) to be a monopoly which is detrimental to the public interest and force them to breakup into their separate parts?  BTW: I think yes. I think much of our future business progress will come from governments becoming astute and defining new rules of commerce to encourage more growth, innovation, service to consumers, and less monopoly control.  I know it's hard to imagine but since the US Guilded Age, the government sometimes steps up and breaks up trusts, banking arrangements, phone companies, and more recently, high tech firms.

An Easy-To-Use, Secure Platform That Holds Everything Your Digital Life Needs Samsung Wallet combines many existing features into one Samsung Pay with Samsung Pass to store and access digital IDs, payment and loyalty cards, keys and more

Samsung Electronics today announced the launch of Samsung Wallet,1 a new platform that enables Galaxy users to organize digital keys, boarding passes, identification cards and more, in one, easy-to-use and secure mobile application. Samsung Wallet is protected by defense-grade security from Samsung Knox and takes advantage of an open Galaxy ecosystem by integrating with Samsung Blockchain Wallet to easily monitor cryptocurrencies and SmartThings to unlock doors.

I'm getting a lot of great email on credit card processing. It used to just stress cheap cheap cheap. People sent me email about devices and other stuff of no relevance. Now, the mail is much more relevant. Check this one out.

According to VISA, 23.6% of your entire pool of subscription transactions would have declined in the last year. Mastercard also reported recently that over $400 billion dollars were lost to false declines and involuntary churn in the last 12 months alone.

FlexPay's solution to this growing problem? We use AI to invisibly recover payment failures and involuntary churn for subscription businesses, increasing the decline recovery rate by 70% and customer lifetime value by 45%!

Any idea if failed payment recovery is something you'll look to optimize in the future?

Happy to share what our clients are doing to stop the bleeding, but I wanted to check to see if this was something you might be open to?

I just looked at my inbox and saw a few items that are worth sharing.

Payments 101: A Guide to Who Does What in Payments - free download! From a processor called Infinicept

A Detailed Guide to Payment Processing by GETTRX.  Very detailed. Love this one.

Service Help for Credit Cards that didn't go through. By Gravy

We're seeing that many companies and platforms with subscriptions or monthly payment plans tend to lose %12 of their revenue every month due to failed payment plans without even knowing it.

Happy to share what others are doing to stop the bleeding but first I wanted to see if this is something you’d be open to. No rush.

I'm not totally sure of the date for this data and whether it can be tracked on a month by month basis. Anyone? 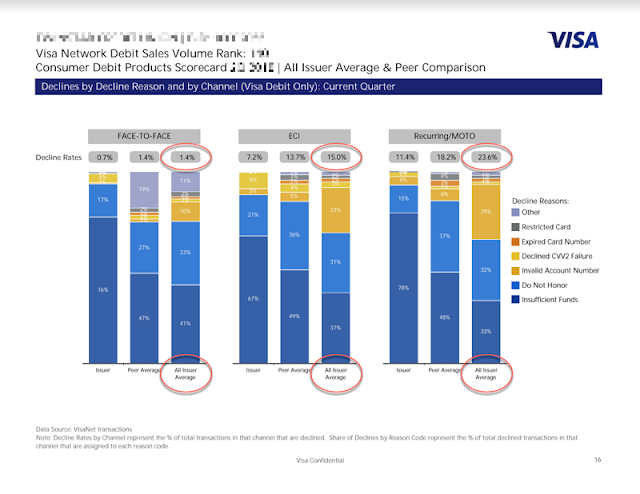